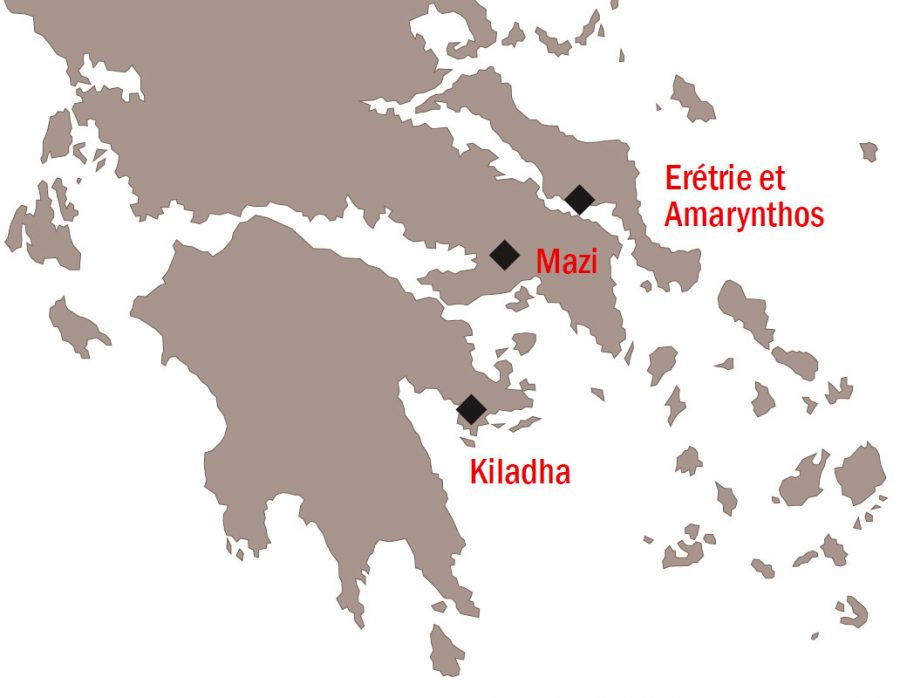 Eretria, excavation of the Gymnasium

Discovered at the end of the nineteenth century and partially excavated by the American School of Classical Studies, the gymnasium was the centre of social and intellectual life of the Hellenistic city. The restauration of the building in 2013- 2014 by the Greek Archaeological Service (with European funding) led to the completely unexpected discovery of a second building, with an identical floor plan, adjoining the gymnasium. Since 2015, the ESAG has been exploring the newly discovered building.

Amarynthos, searching for the sanctuary of Artemis Amarysia

Literary sources, inscriptions and several architectural fragments found 11 km east of Eretria indicate that the important extra-urban Eretrian sanctuary of Artemis Amarysia must be located in the vicinity. In the last years, the Swiss School has discovered an early Hellenistic stoa. The main goal for the coming years is to confirm the location and excavate the sanctuary site.

The Mazi Archaeological Project (MAP), a collaboration between the Ephorate of Antiquities of West Attika, Pireus, and Islands and the Swiss School of Archaeology in Greece, is a diachronic regional survey in northwest Attica. The Mazi Plain is best known for two spectacular sites: the Attic fortified deme centre of Oinoe, and the town and fortress of Eleutherai. MAP aims to address long-term questions of human occupation, human-environmental interaction, territoriality, and movement from prehistory to the present.

In the area of Franchthi Cave, the search for an Early Neolithic settlement, possibly one of Europe’s earliest villages, will be resumed, using the results of the 2015 offshore piston coring and geoacoustic modeling activites. At Lambayanna beach, a few hundred meters to the north, the extent, both in time and space, of the submerged Early Bronze Age town will be further explored.